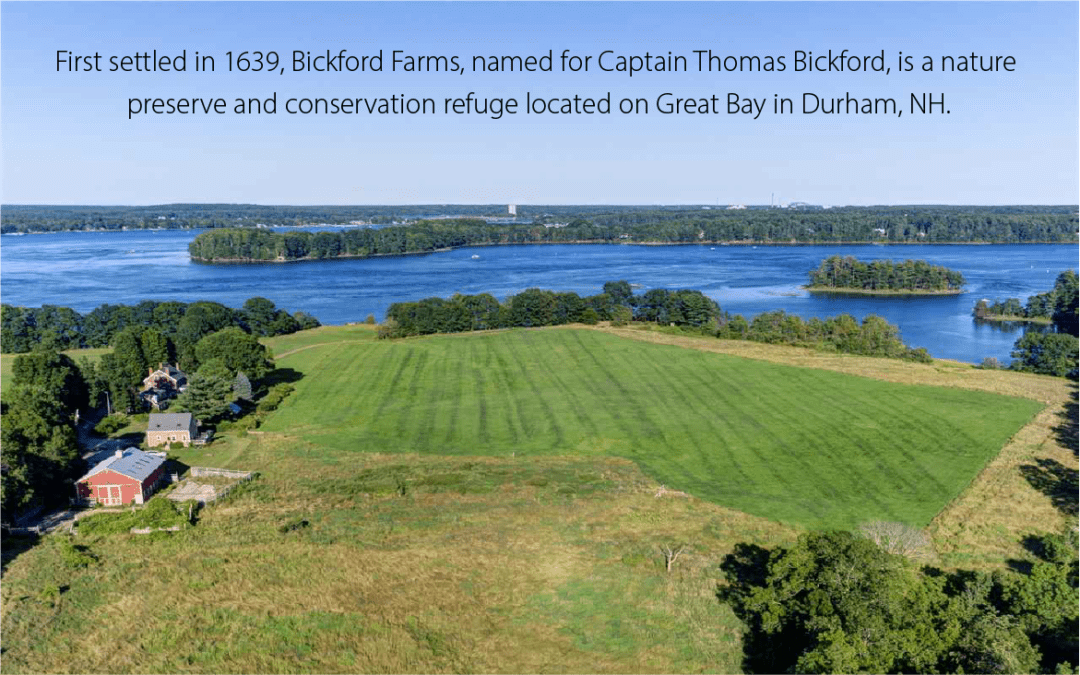 In New Hampshire whose state motto is Live Free or Die, we are excited to build out a decentralized venue: a relaxed setting to help foster thoughtful discussion with a high signal to noise ratio.

Bickford Farms was settled by explorer Darby Field in 1639. In July of 1694, Captain Thomas Bickford single handedly defended the farm against 100 attackers during an event known as the Oyster River Massacre. New Hampshire has a fascinating history from the time of the Native American tribes to the first European settlers and beyond. New Hampshire played a key role in the American Revolution.

The farm is a wildlife, conservation and nature preserve which is host to hundreds of species of birds and other animals including deer, marmots, rabbits, heron, bobolinks and the occasional bear and wildcat.

We heard from a lineup of industry speakers and attendees during the panels and open discussions. It was a day filled with both thoughful discussion, food and drinks on the banks of the Great Bay.

We had presentations ranging from real world applications using blockchain technology, the history of Bitcoin, the lightning network, Wall Street and the crypto industry and more. 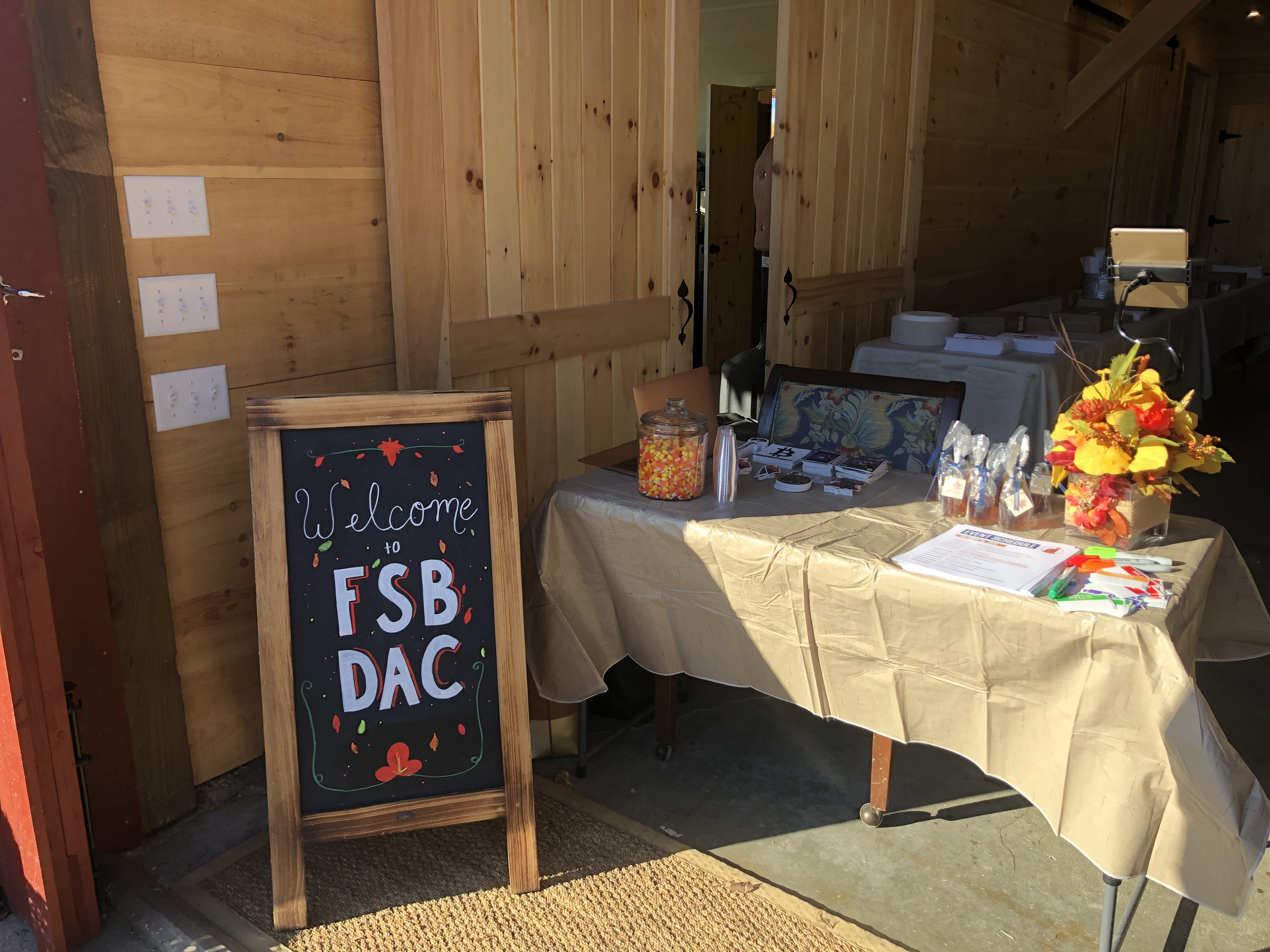 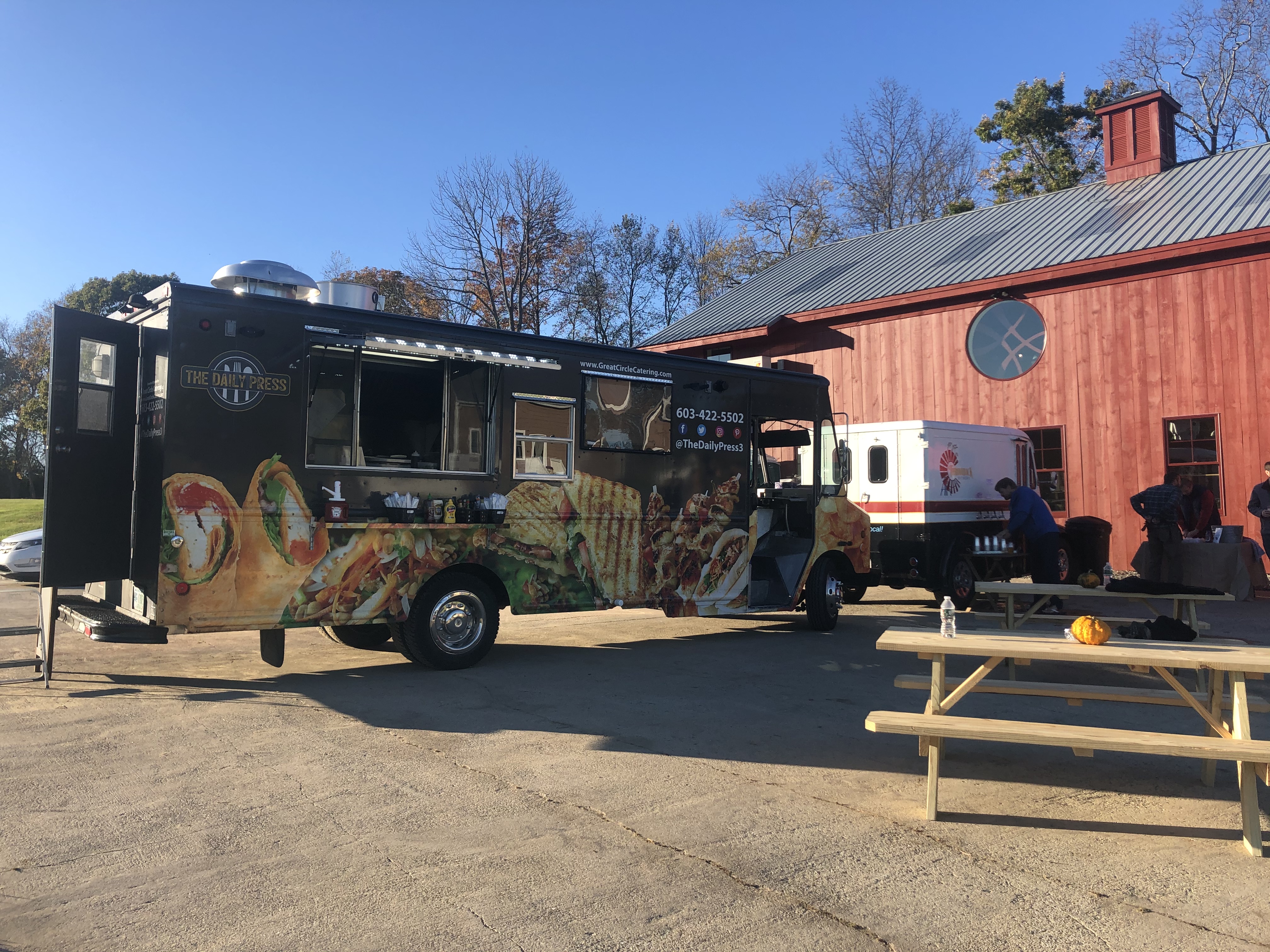 Here’s a link from Bruce on Periscope showcasing the farm. 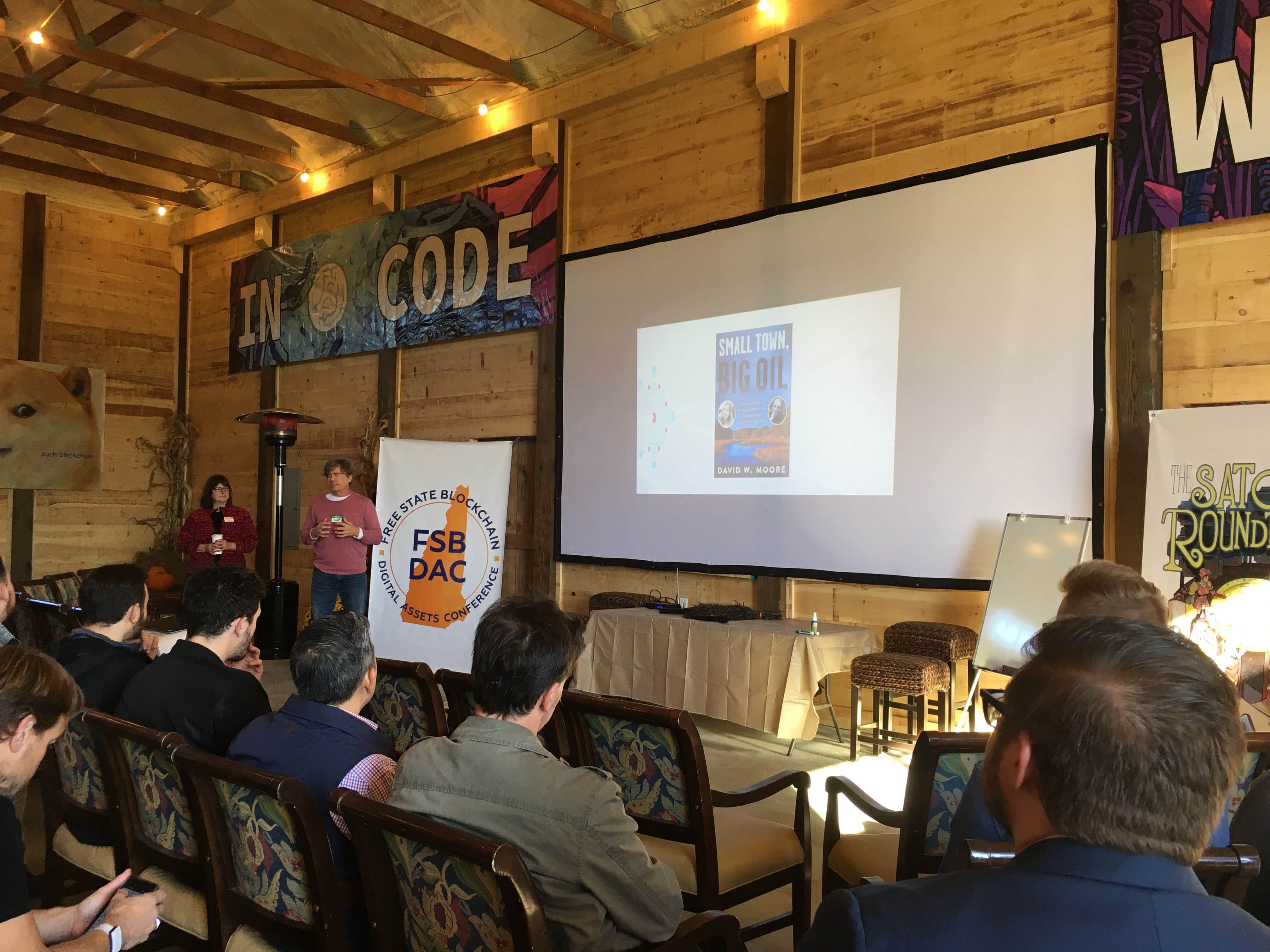 Lisa McGunnigle and Clay Mitchell, New England Early Response Strategies, gave a presentation about energy democratization through blockchain technology. Going over the history of energy and how we can improve energy democratization. They also explained how Renewable Energy Certificates (REC’s) currently work in New Hampshire and how blockchain technology provides a solution to the current problem. 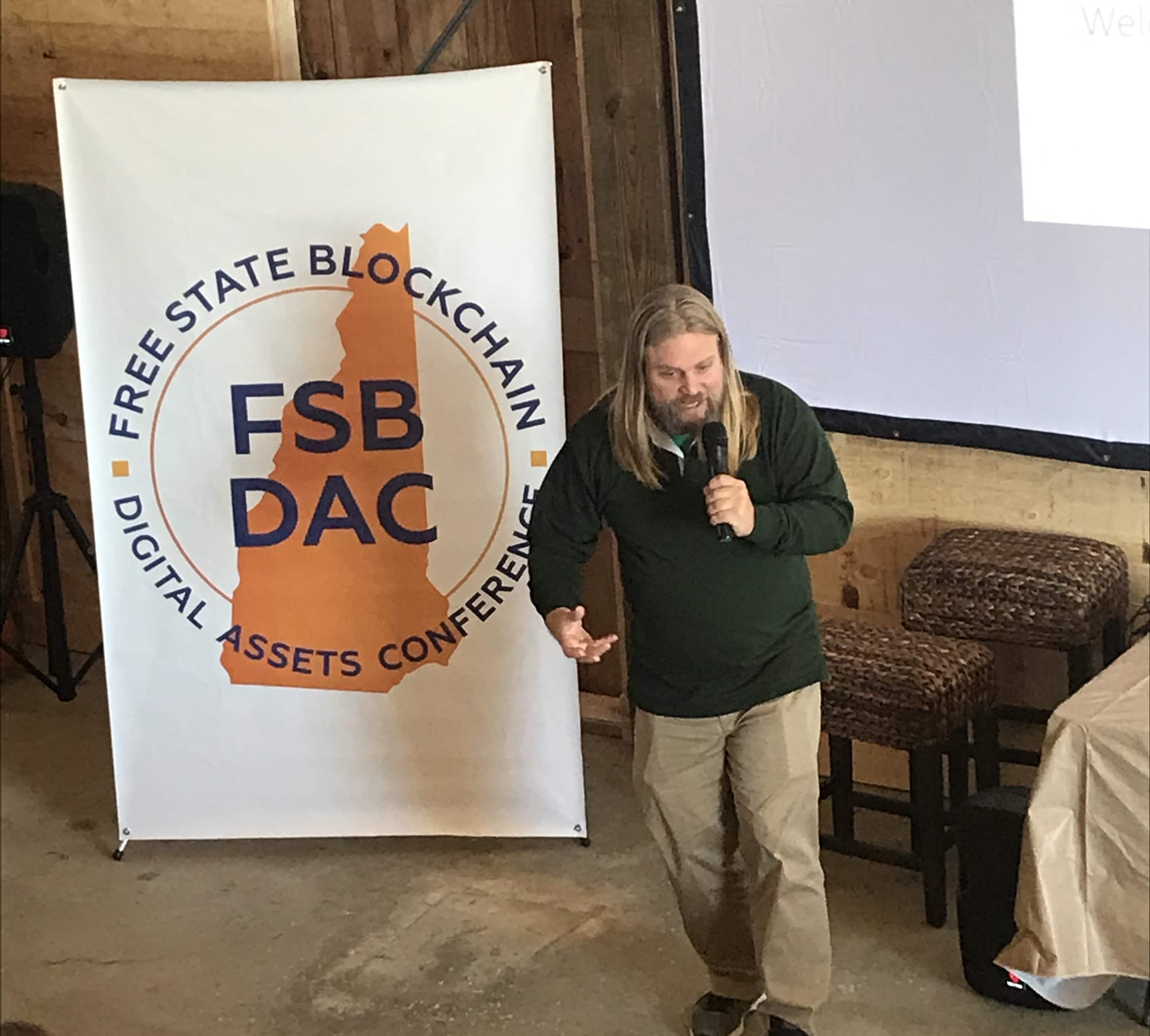 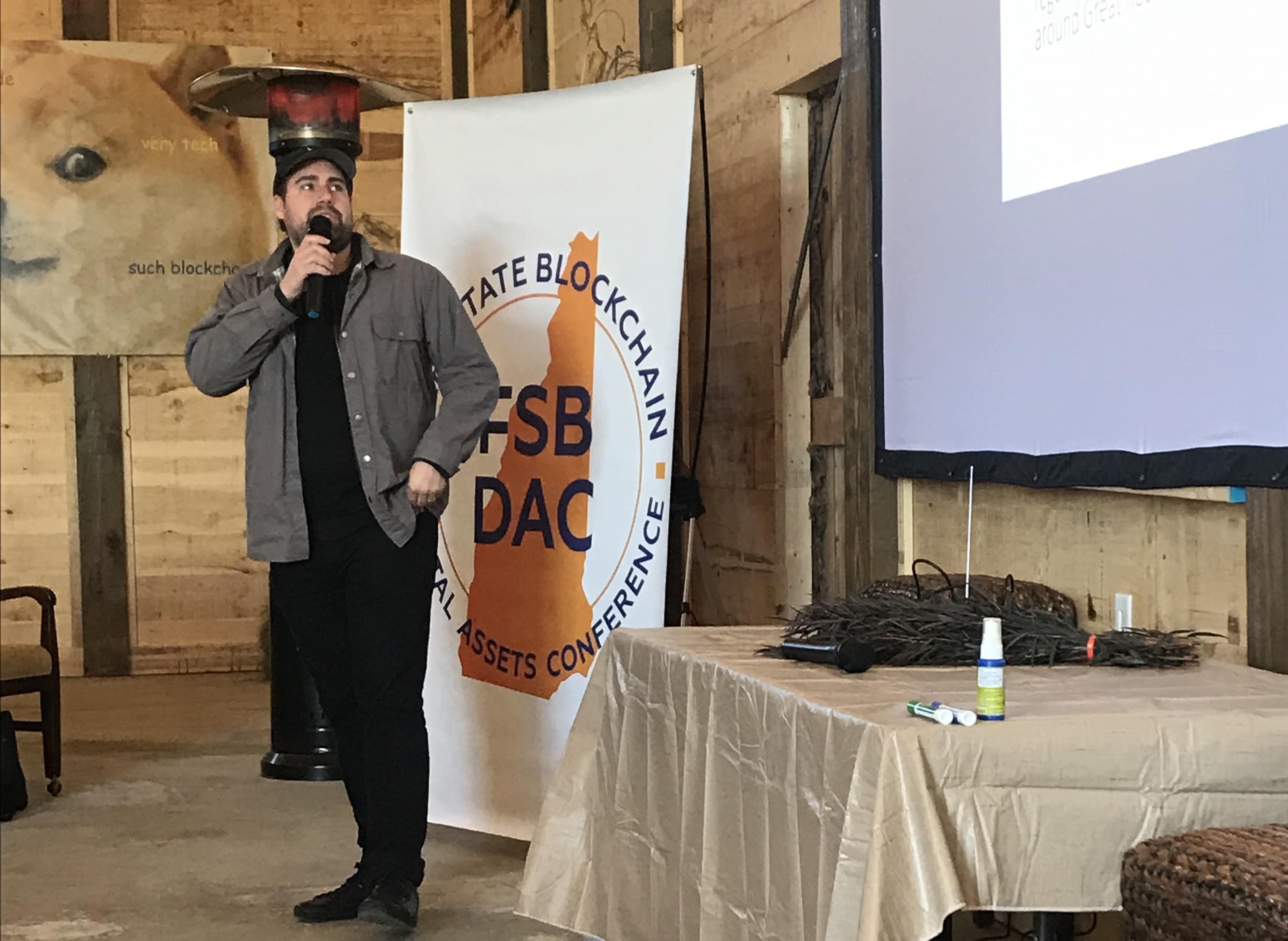 Pete Rizzo, former Coindesk Editor, gave an intro to blockchain technology and cryptocurrrency presentation. He explained to us that it is very likely cryptocurrency is very early in its lifecycle as a technology. He went over the history and compared it to other technological innovations – it was a great overview enjoyed by both industry beginners and veterans.

Vin Armani, CTO of Cointext, went over the topic of “Security Tokens on Bitcoin Cash” which went into detail on the Simple Ledger Protocol (SLP) and what his company CoinText is currently up to. He provided us with some useful information on both SEC and FINRA regulations as well as some fantastic resources (such as blockchainlawguide.com) to help stay in the loop as regulators continue to get more involved in the space. 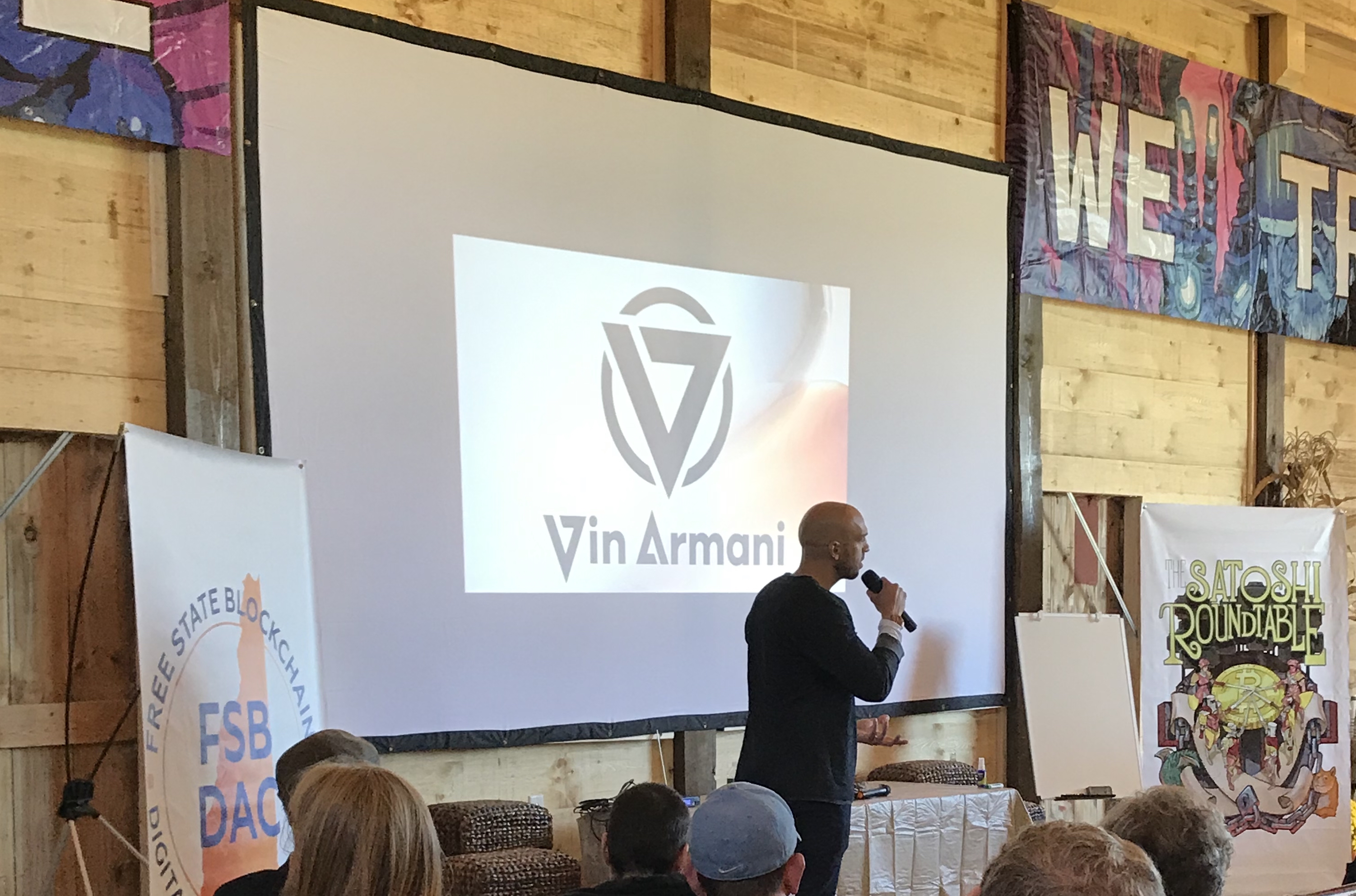 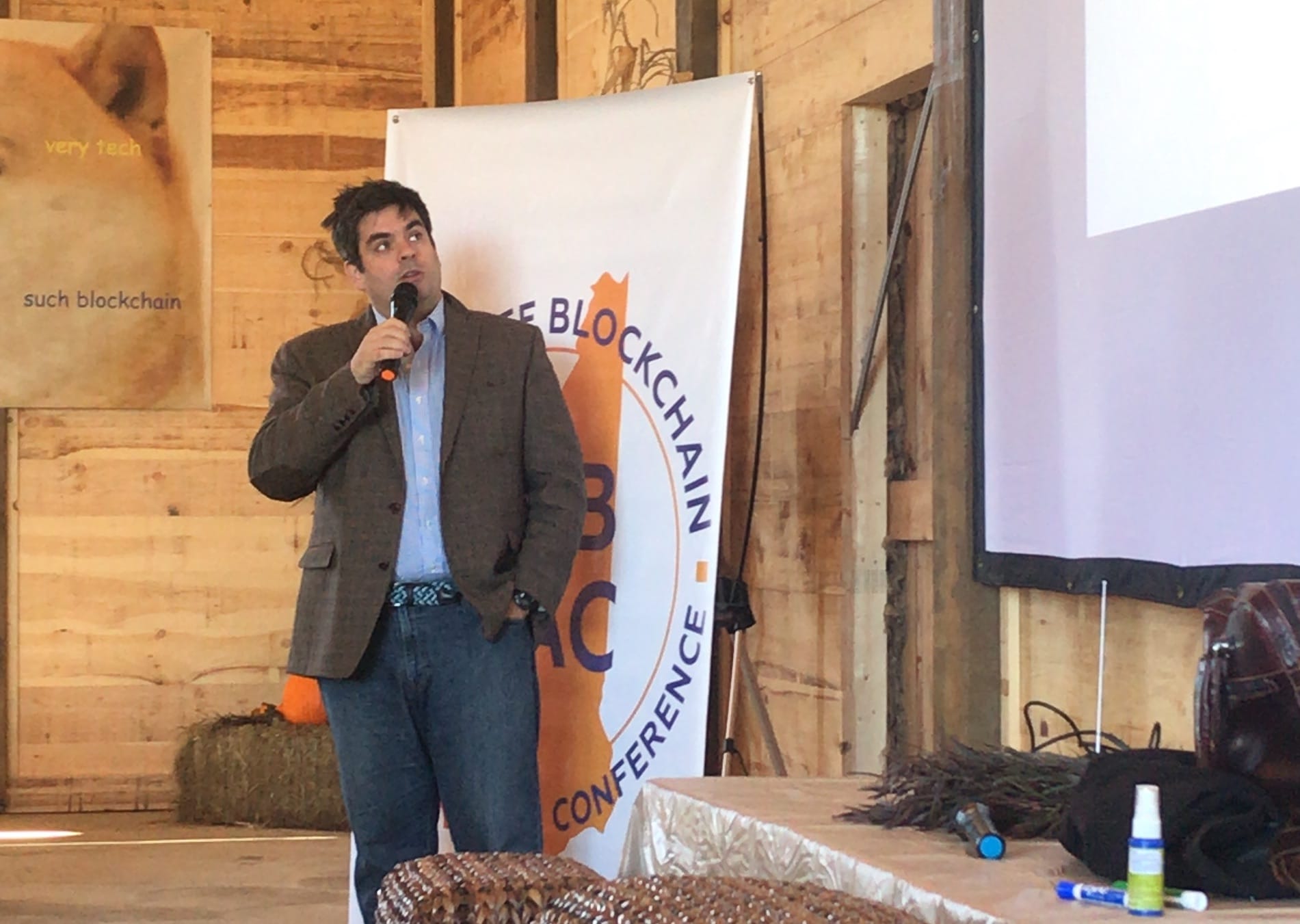 Preston Byrne, Byrne & Storm, PC, led a presentation centered around “Free Speech Money” and gave us an update on the state of cryptocurrency as a tool for human liberation. He looked at the evolution of different technologies over a 10 year span to give us a glimpse into where bitcoin is in the big picture of things. Preston’s full presentation on Free Speech Money.

Tron Black, Ravencoin Developer gave a talk on “Crypto Street vs Wall Street”, looking at the old system in comparison to the new system and analyzing how they are bridged. There are two parallel systems: 1) The traditional Wall Street and Federal Reserve system and 2) The Crypto ecosystem. As a percentage, the crypto-ecosystem is growing faster than the traditional highly regulated fiat system. 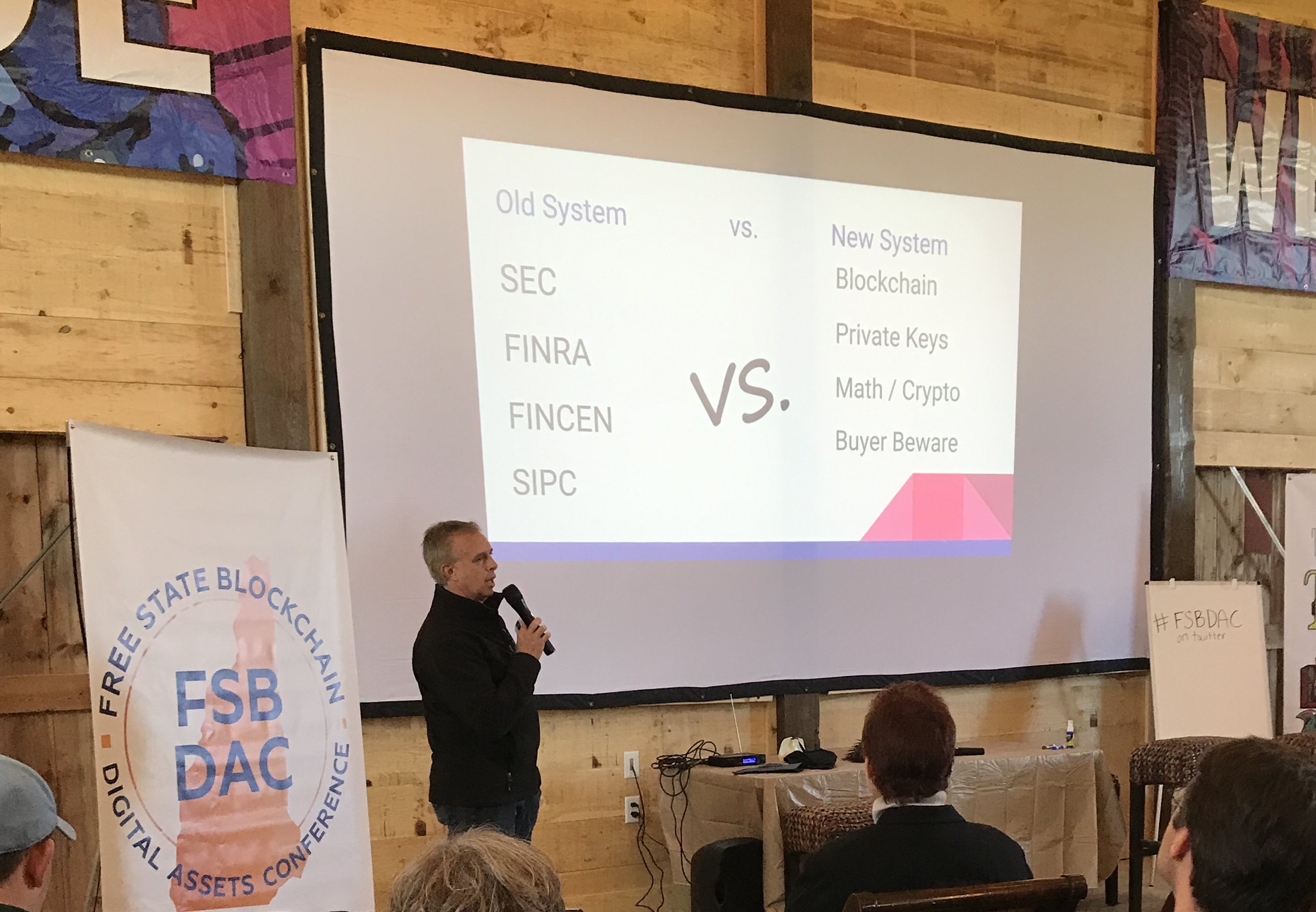 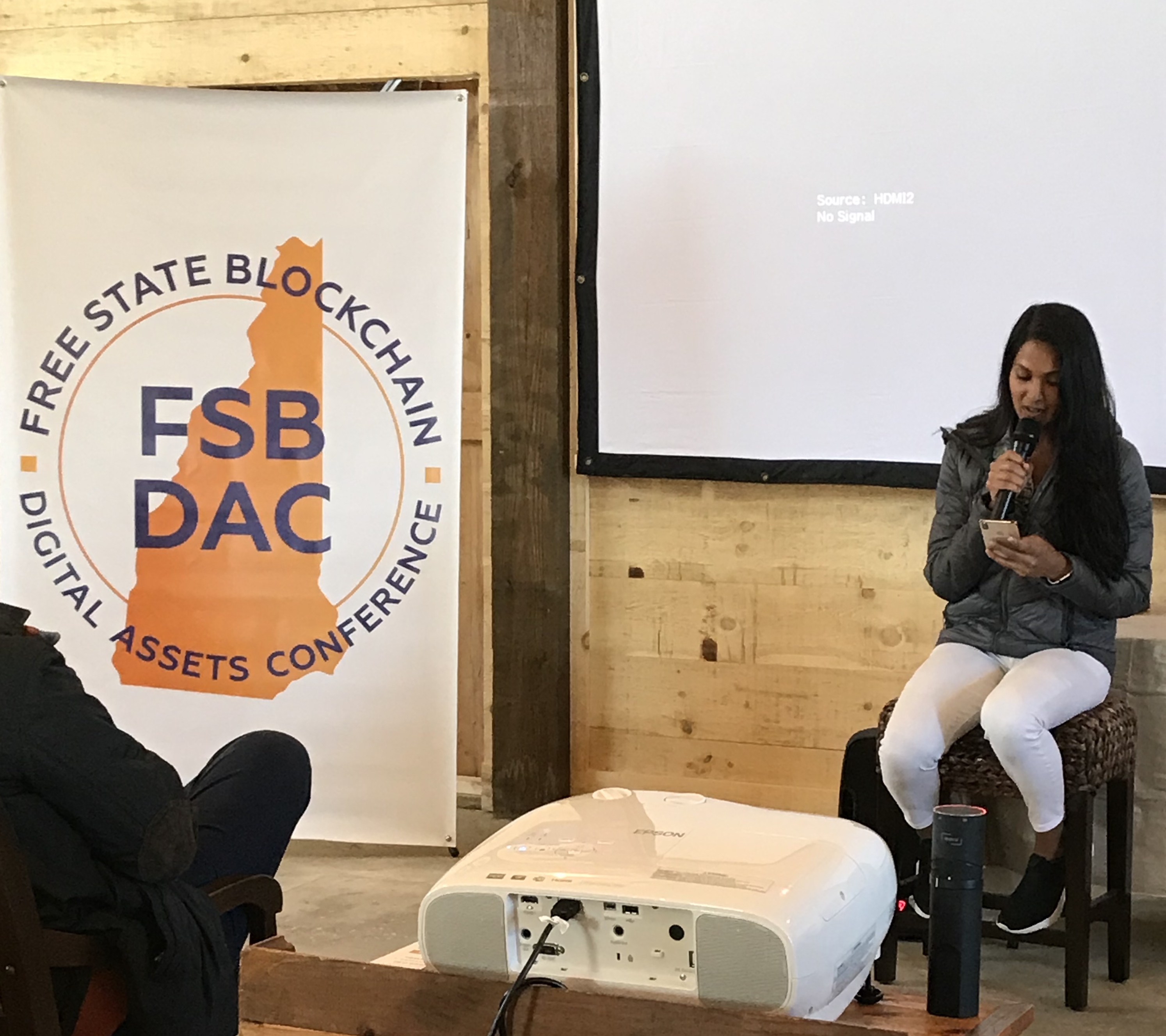 Preethi Kasireddy, CEO of TruStory, led a discussion centered around bitcoin maximalism and the community around it. The audience was able to have an open discussion, very similar to her platform TruStory which encourages similar dialogue centered around thoughtful discussion and tactics to improve the quality of online interaction.

Paul Snow, CEO of Factom, talked about Factom and what they are currently up to on the PegNet. He went into detail about how they are building a payments and store of value network on the Factom protocol. 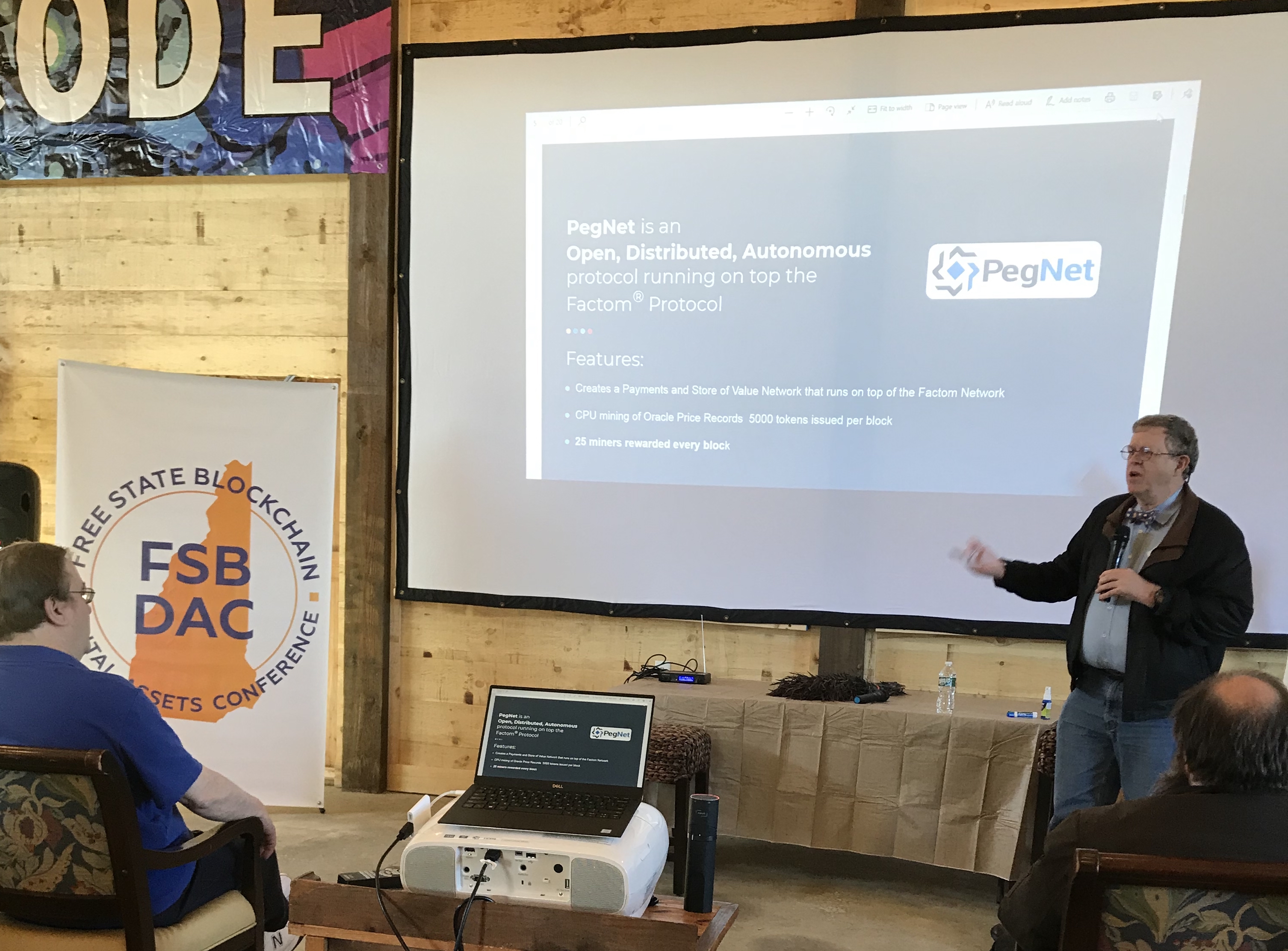 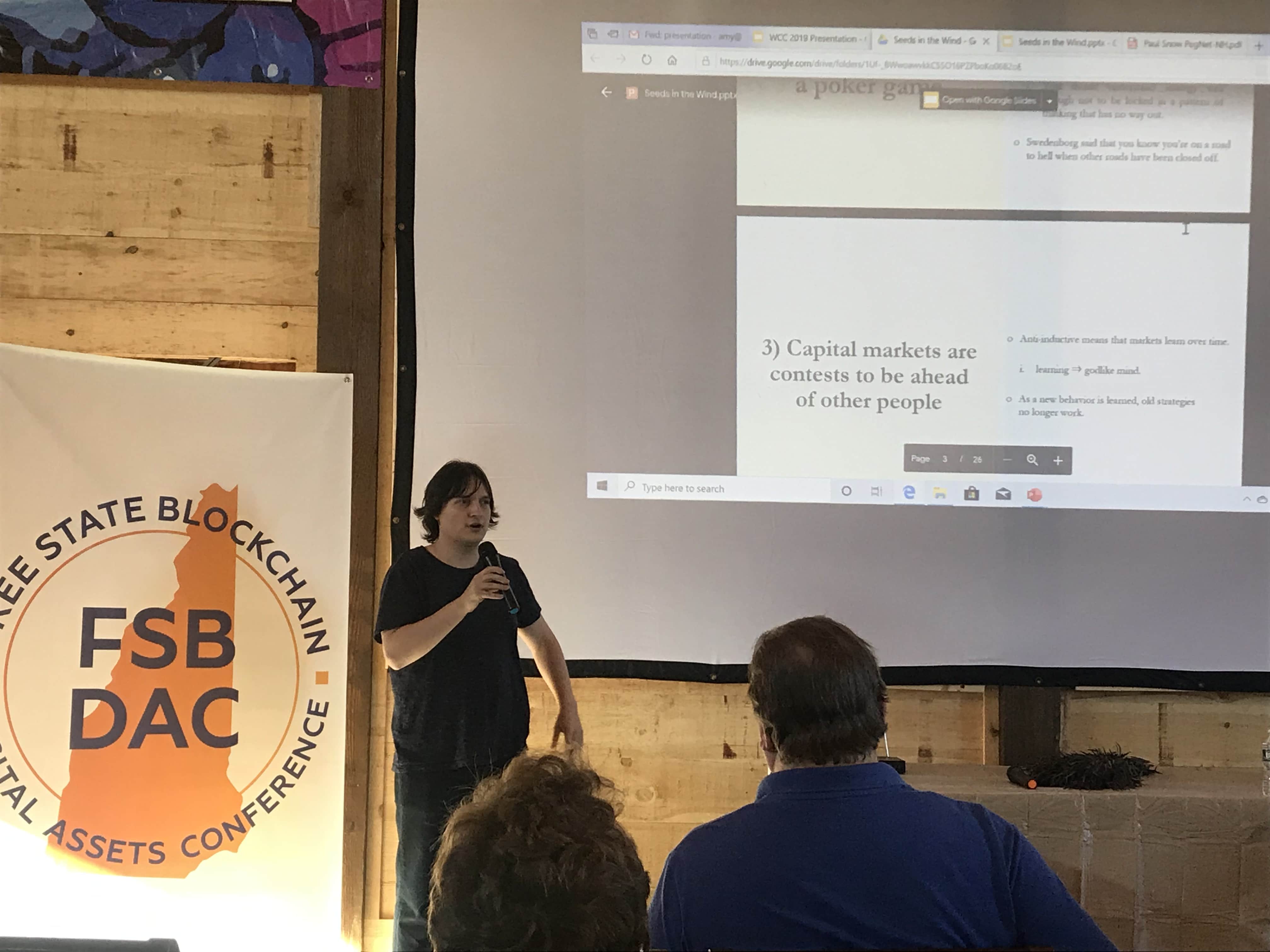 Daniel Krawisz, gave a presentation titled “Seeds in the Wind” going into detail about BSV which led to a lively discussion and debate with the audience. He covered capital markets, qualities of money, the Byzantine General’s problem, proof of stake vs proof of work and much more. 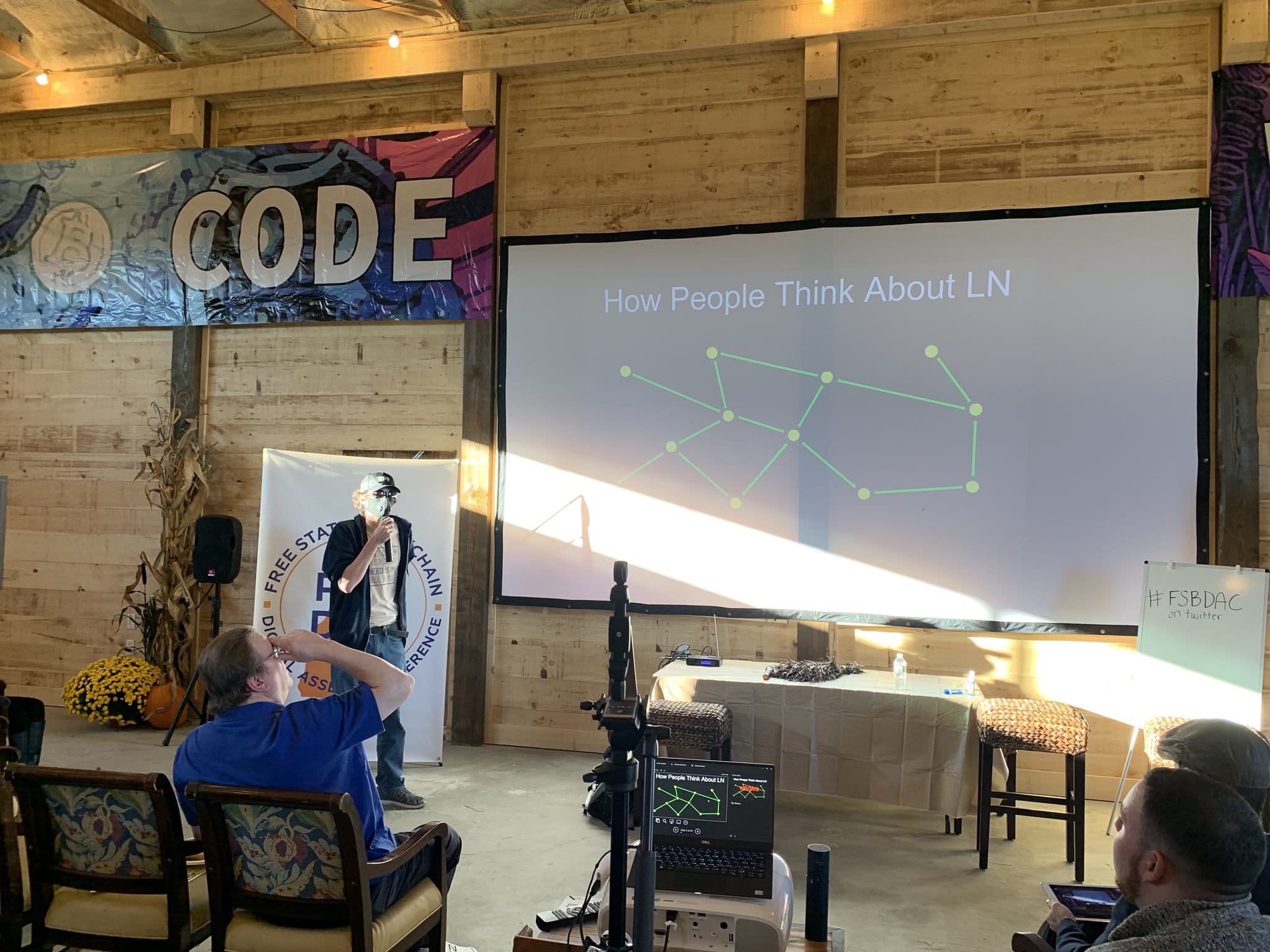 Brian T. Shinobi [#Toxic], Block Digest Podcast, covered mental models for reasoning about second layer evolution. He went over the lightning protocol stack and how that could be evolved for different situations. He concluded by stating that two potential possibilities are exponential improvements in onboarding people to the Lightning Network and improving routing liquidity.

Carla Gericke, Foundation for New Hampshire Independence, closed out the evening with a spirited presentation about #freeross. She went over her opinions on the case and explained some of the background behind the case and why it is truly a travesty he received such a long sentence. 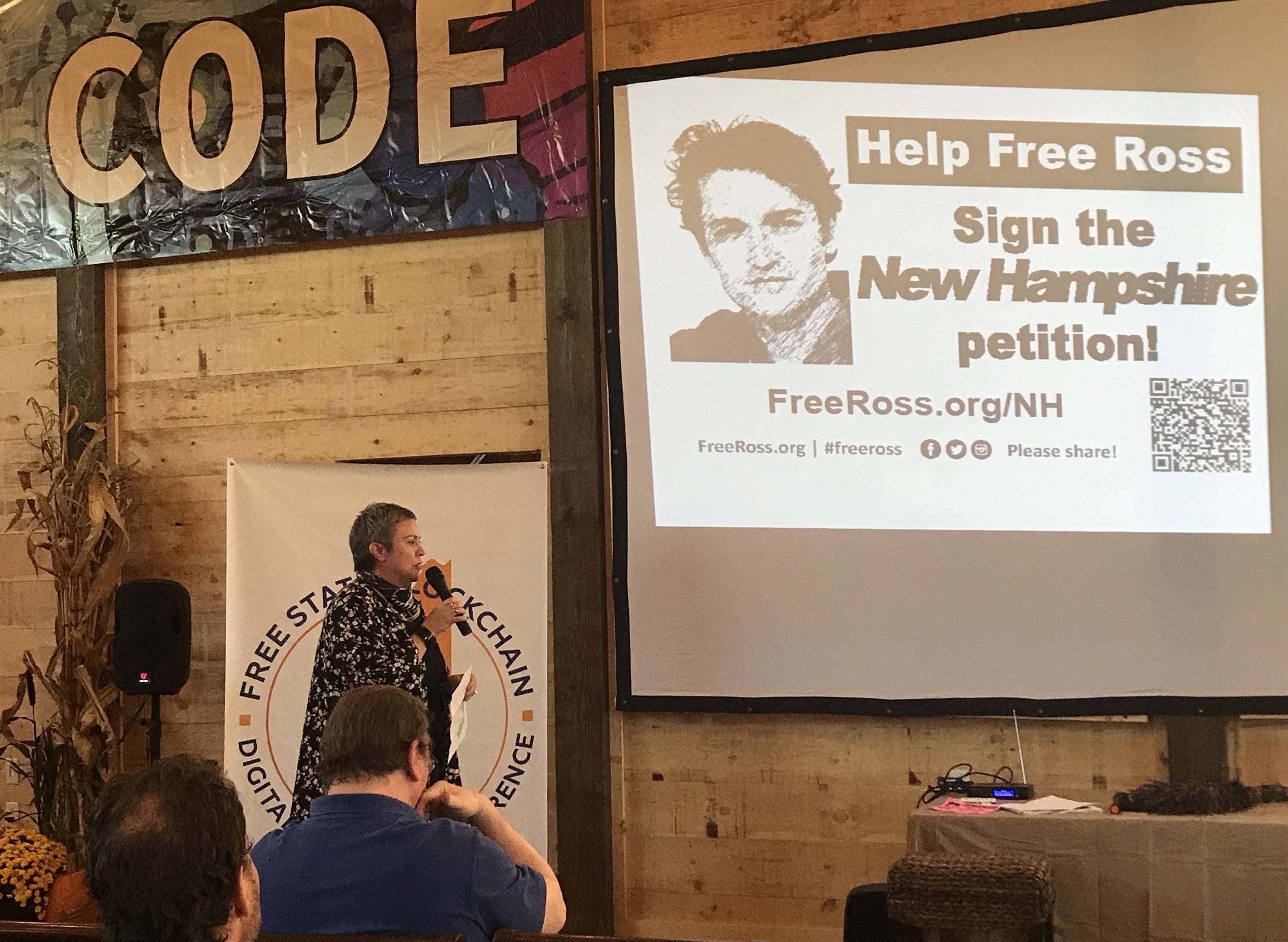 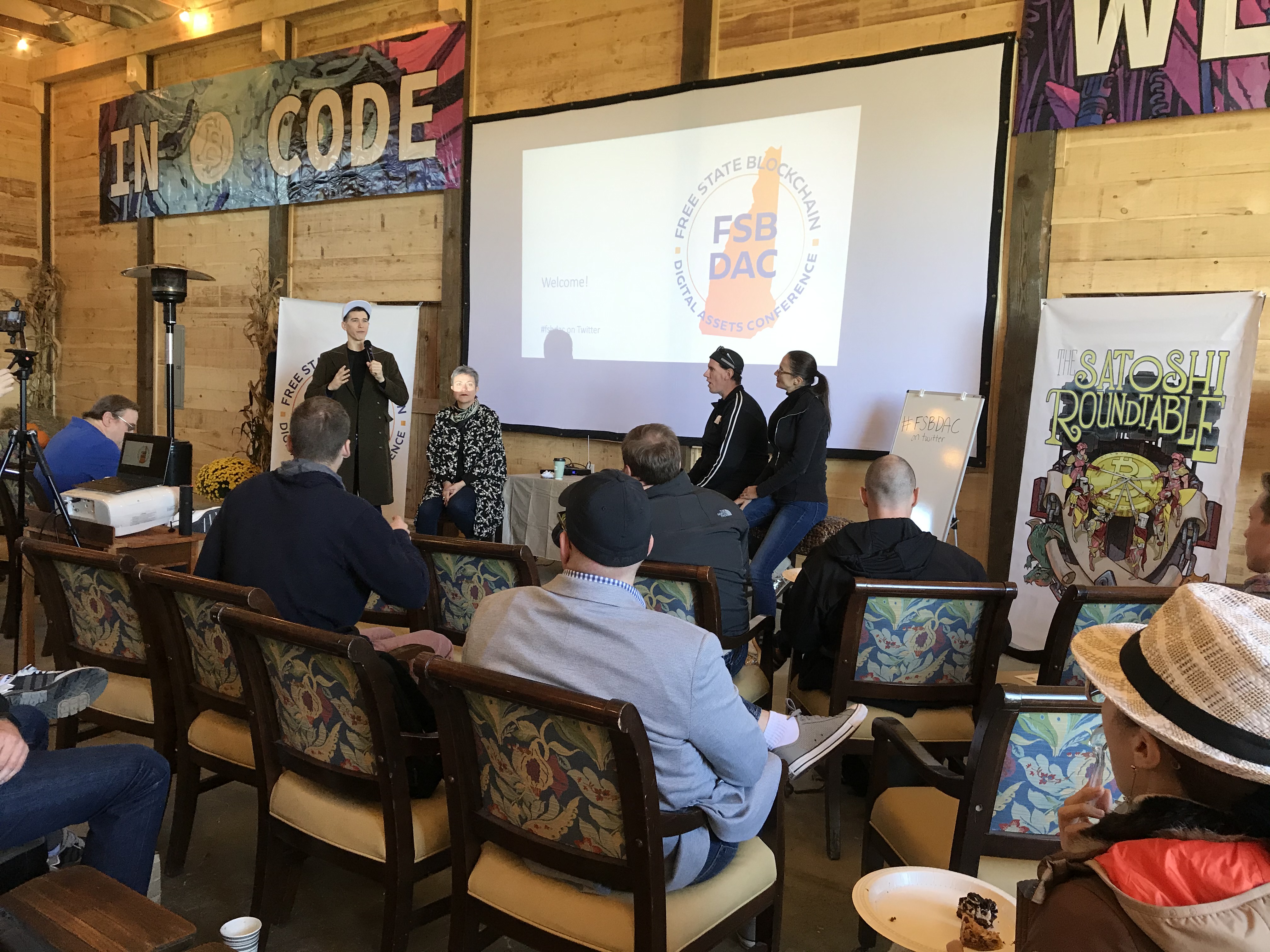 Massive thanks to @brucefenton (as well as his family and staff) for hosting a fantastic series of events in NH this past week.

I suspect @BlockchainNH, in short order, will be the hottest crypto conference ticket in town. Impressive caliber of venue, attendees and speakers.

@tronblack is presenting latest development of @Ravencoin at #FSBDAC A lot of work have been done and great #progress achieved since I interviewed Tron in January. Keep up good work. pic.twitter.com/9ef5Gv1n0a

Had a great time at @BlockchainNH - thank you @brucefenton and the @ChainstoneLabs team! See all you free staters again at @NHLibertyForum in February if not sooner. 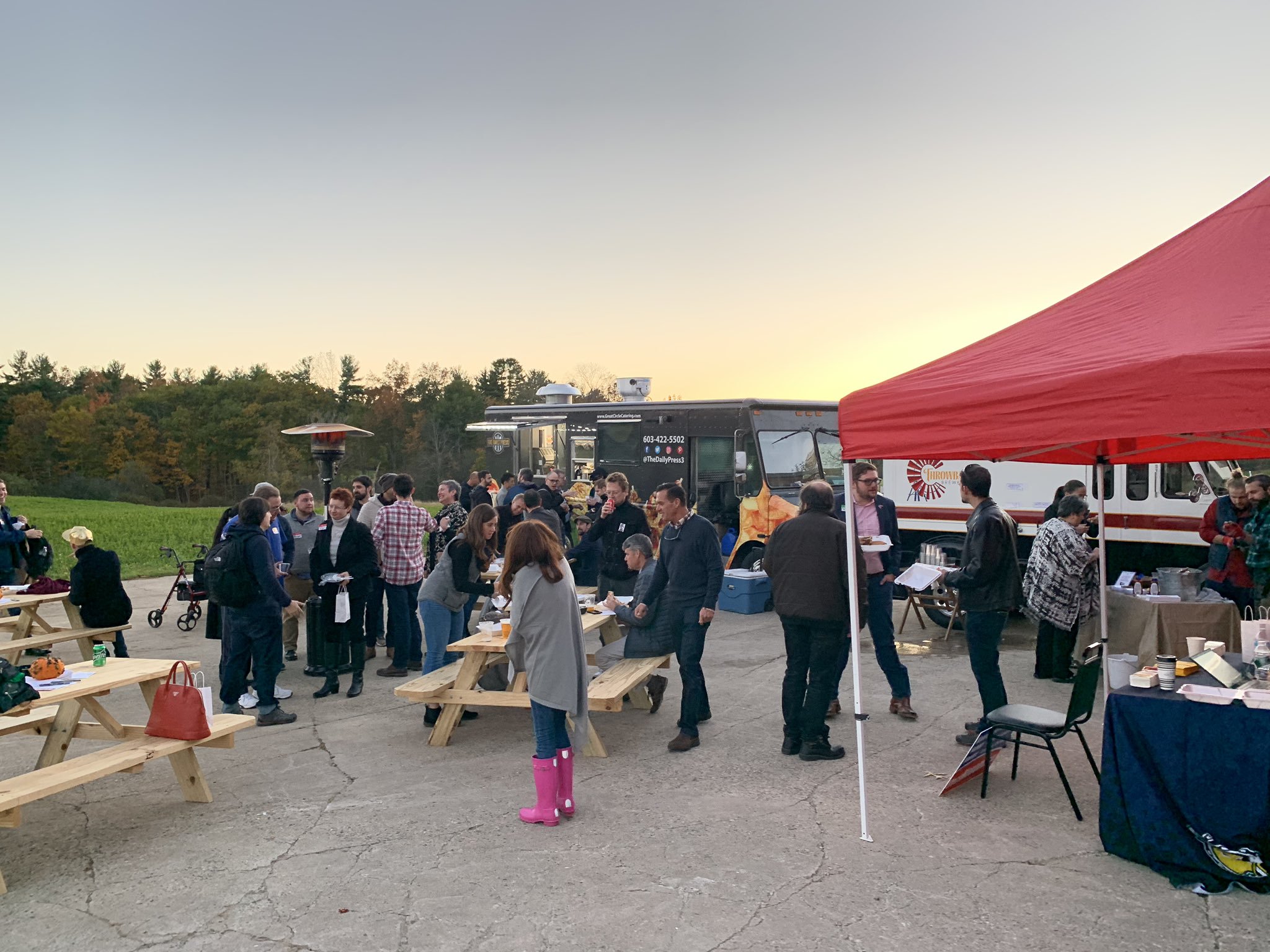 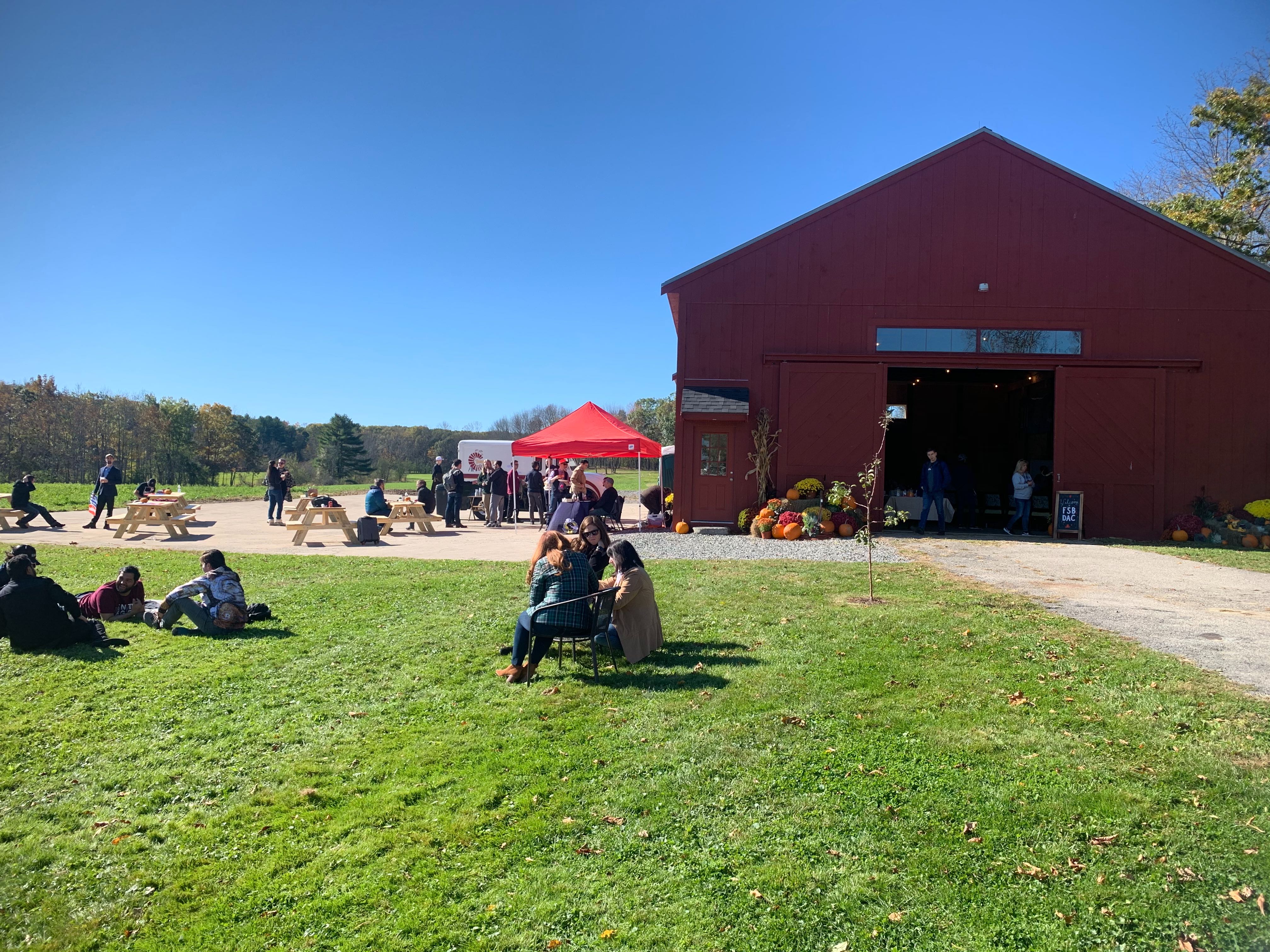 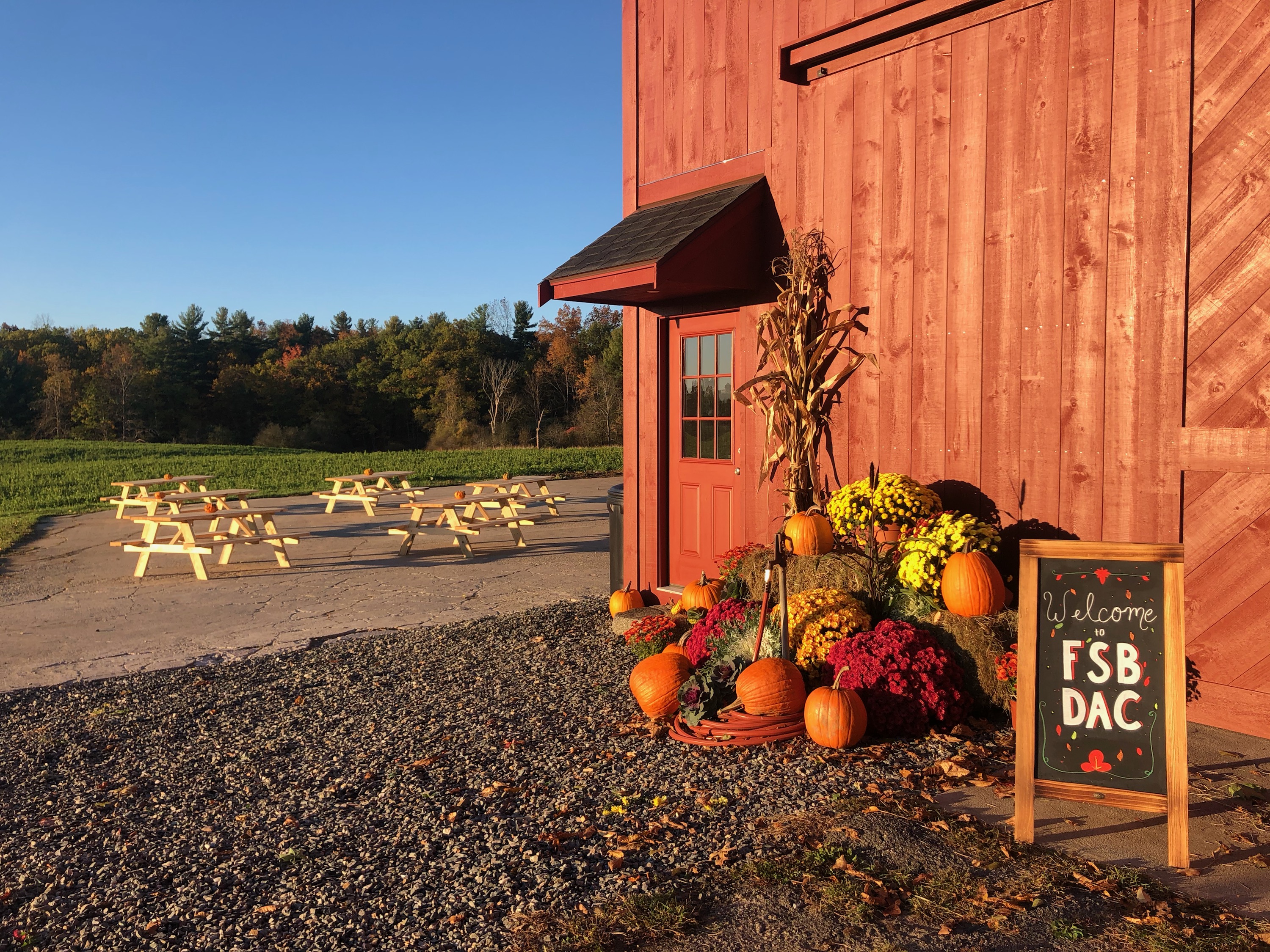 We are building something unique here and the farm is a great venue because it allows for high quality discussions in a setting that is still relaxed and casual. It is only an hour and a half from Boston and is easy to get to in the northeast. Hopefully this historic nature preserve on the banks of the Great Bay will grow into a resource for the community.

On October 17th and 18th we hosted the Sidetable, which is a smaller version of the Satoshi Roundtable characterized by open discussion and targeted discussion groups.

We’ll be hosting a few events in the comming year, the venue is also available to others who are looking to host events. If you have a cypherpunk/open source/fintech/educational related type of project be sure to fill out the contact form below as those types of events are very much in line with what we are hoping to build here.

We hope you can join us next time!